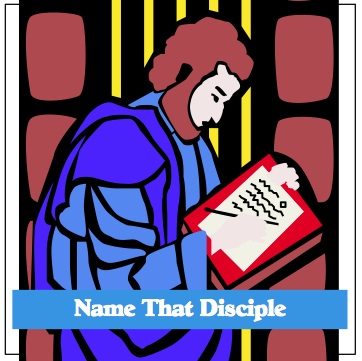 The Scripture Lady loves creating Bible story games! Here is one called “Name That Disciple” to teach the names of the disciples.

Have you wondered what it would have been like to be one of Jesus’ disciples?  The Bible shows that the disciples exhibited a gamut of emotions while with their Savior – everything from pure elation to fear.  How much do your children know about these great men of God?  Do they know that these chosen men were really just like them with thoughts, feelings, strengths and weaknesses?

Here’s a Bible story game that will be sure to capture your children’s attention as they learn more about Jesus’ twelve friends.  It’s called “Name That Disciple”…

Bible story games will help your children learn God’s wonderful stories in a fun way and for this one you will need to do the following:

You will need to make 12 cards.  Number the cards 1 through 12 on their fronts.  On their backsides, list the information points found below for each disciple.  You do not want the child to see the disciple’s name, so you may want to discreetly label each card so that only you know which disciple the card refers to.  I made my cards on my computer and added some nice color and images.  My finished size for each card was 4in x 6in.  Finally, laminate your cards for long-term use.

Divide your class or group into 2 teams.  This game will be best played if you study each disciple beforehand.  Have one child come up from the first team and have him pick a number.  You, the teacher, will take the card off the board and explain that you are going to give a clue about one of the 12 disciples.  The first clue that is read will be worth 500 points.  After hearing the clue, the child may try and guess which disciple is being talked about.  If they guess right, he will earn 500 points for his team.  If he guessed wrong, a player from the other team will get to hear the next clue, which will be worth 400 points.  Again, a guess may be offered.  Play goes back and forth like this between the teams until one team has given a correct answer.  The number of points earned will be the amount listed by the clue.  Obviously, the clues get easier and therefore each clue given is worth fewer points.  If no one succeeds in guessing the correct disciple, a new card is picked.  The team with the most points wins!

“Let us throw off everything that hinders us and the sin that so easily entangles us an let us run with perseverance the race marked out for us.”