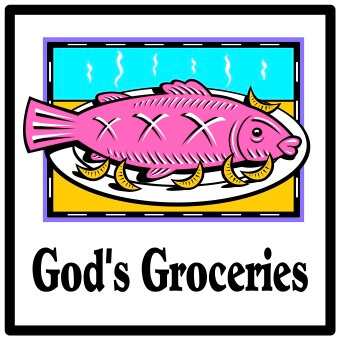 What’s your favorite food? Chocolate chip cookies? Lasagna? Bacon and eggs? Now what’s really better? Your favorite food or God’s Word? I hope you said, “God’s Word.” The psalmist thought so in Psalm 119:103, which says: “How sweet are your promises to my taste! Sweeter than honey to my mouth!“ Every word in the Bible can nourish our souls. Here’s a fun Bible school activity that can be played much like Bingo. But this game will introduce your kids to foods listed in the Bible and the contexts in which they’re found. It’s called “God’s Groceries”.

Bible verse games will help your kids hide God’s Word in their hearts and for this one you will need to do the following:
This game will take some preparation, but your kids will be blessed by your effort. Prepare 2 identical sets of 18 different picture cards of foods found in the Bible. (I have provided you with a list below.) Make your cards about 2”x 2”. Laminate them for long-term use. Place one set of the cards in a bucket out of which the kids will pick. Take the other set of cards and divide them into 2 sets of nine and place each set in a 3 x 3 grid on a table or in a pocket chart. Have the list of questions ready that are found below. You are now ready to play the game.

Here’s how you play:
Divide your class into 2 teams. Begin by saying much of the same that I said in the opening of this article. It’s a nice opener for the game. Each team will get a bingo grid that they are trying to get 3 in a row on. Let a child come forward and answer one of the Grocery List Questions. If he gets it correct, he gets to take out a card out of the bucket and match it to one of the cards on either grid. Hopefully, the card will match a card on his team’s grid, but it might match the other team’s grid. This is OK. In fact, it makes the game a little more fun and competitive. Play alternates between the two teams. The first team to get 3 in a row, wins.

Grocery List Questions:
When asking the question, read the verse and say the word “blank” for the missing food.

This verse is talking about the Israelites when they were wandering in the desert. They were complaining about the food situation and were remembering back to days when they at least had this kind of food that looks like a ball and when people cut it, it often makes them cry.

If you’ve ever gone camping, you know you must pack food for your journey. This verse shows a time when David was camping out in the wilderness in the land of Gilead. One of the foods they brought for their campout were these tiny little things that when cooked become kind of mushy and people love to put them in their burritos with cheese.

Poor silly Esau! If only he had cared more about the things God had given him, such as his birthright, than thinking about his stomach, this Bible story might have turned out differently! Jacob gave his brother a pot of stew and this doughy food that is often used to make sandwiches.

How was Jesus going to feed all the people who came to hear him speak with only seven loaves of bread and this food that is often caught with a pole and a worm on a hook? He fed them by a miracle!

In the Old Testament, being a child of the Lord meant that you could only eat certain things. This verse shows a partial food list of meats they were allowed to eat. The missing meat comes from an animal that is not known for its intelligence and likes to say, “Bah” a lot.

Surely the churning of milk brings forth (________), and the wringing of the nose brings forth blood: so the forcing of wrath brings forth strife. Proverbs 30:33 (butter)

This Bible verse uses a yellowish food that is often added to popcorn at the movie theatre. This food is smooth, but wrath or anger is not. It’s better that you stir up this food rather than a bad temper.

Poor Job! God allowed him to go through a lot of hardships. No wonder he felt like God was poking him and forming him into this kind of food that is often served with crackers in many different varieties, such as cheddar and swiss.

This verse shows that God will always give His children what is best. He is our Father. Would a good father ever give his child a scorpion if he asked for this kind of food that is often scrambled in the morning and served with bacon?

John the Baptist must have made an interesting dinner guest – especially if he ever requested this kind of food which is really just a green hopping insect that was also one of the plagues found in Exodus. Do you think they were crunchy?

And thou shall not glean thy vineyard, neither shall thou gather every (________) of thy vineyard; thou shall leave them for the poor and stranger: I am the LORD your God. Leviticus 19:10 (grape)

After the Lord led Moses and the children of Israel out of Egypt, he had a long talk with Moses and gave him a list of do’s and don’ts. This Bible verse shows how God wanted his children to take care of the poor and stranger by leaving some of this food on the ground for them to take. This food is often found in clusters and grows on vines. They are usually green and purple.

Moreover the LORD spoke unto Moses, saying, “Take thou also unto thee principal spices, of pure myrrh five hundred shekels, and of sweet (_________) half so much… Exodus 30:23 (cinnamon)

While the children of Israel were in the desert, God commanded Moses to build a tabernacle where God could dwell. God gave detailed instructions of how he wanted it built. He even wanted this sweet brown spice, which is often used with sugar to make ooey gooey rolls to be a part of His dwelling place.

Lot’s wife had a difficult time trusting in God. Because of her lack of trust, she turned into this white food that is often a spice on every kitchen table. Be careful! Don’t put too much on and don’t look back when God tells you not to!

Just in case you’re interested, you might want to check out this book with even more Bible lessons for your kids: Super Heroes Bible, The

“How sweet are your promises to my taste! Sweeter than honey to my mouth!“