Young David Went Up, Down, Over and Under: Vacation Bible School Ideas for Preschoolers 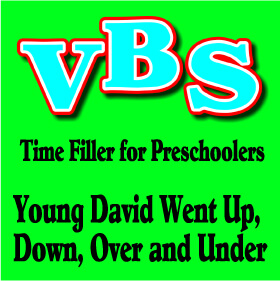 Vacation Bible School ideas for preschoolers are great for your little ones! Here is one called “Young David Went Up, Down, Over and Under.”

Up, down, over and under.  These are all words your preschoolers are learning, so why not give them this fun and easy activity to play based on young David’s journey to bring food to his brothers?

Vacation Bible School ideas for preschoolers will make your VBS even more special and for this one you will need to do the following:

In 1st Samuel, chapter 17, we learn of young David and how he had 7 brothers, some of which were fighting in Saul’s army against the Philistines and Goliath.  David’s father Jesse asked David to go check on his brothers and to take them some food.  This is the background you can share with your preschoolers and tell them that they are going to pretend to go on David’s journey with him.

Do each of the above actions again and have the children say the word for the action you do.  You are now ready to tell your story.  I have given you a script you can use, but feel free to improvise and come up with your own dialogue as you go along.  Play until the children tire of it.

Young David Went Up, Down, Over and Under

One day David’s daddy asked David to go bring his brothers some food.  David’s brothers were fighting the Philistines and the big, bad man, Goliath.  So David took the food his daddy gave him and began his journey.  Would you like to come along too?  Wonderful!  Here we go!

David walked across the field and he soon came to a hill.  So David walked… (point UP and encourage the children to say, “UP”.)  (For the rest of the story, I will just write the word you are to act out.) …the hill.  “Whew!” David said, “That was a steep hill!”  Next David had to walk (DOWN) the hill.  But there was a rock in the way and so he stepped (OVER) it.  David got tired of walking (DOWN) the hill, so he decided to roll (DOWN) instead.  At the bottom of the hill there was a nice stream that he jumped (OVER).  He stopped to take a drink and looked (UP) at some birds flying (OVER) his head.  David was hungry after climbing (UP) and (DOWN) the big hill, so he decided to sit (UNDER) a tree and eat a bite of bread.  While he was resting, he saw a squirrel scamper (UNDER) a bush.  He also saw a spider crawl (OVER) his sandal.  But David wasn’t afraid.  He knew God had made all the different creatures and animals.

David decided it was time to stand (UP) and get back on his journey to his brothers.  But suddenly, out of nowhere, David saw a bear climbing (DOWN) out of a tree!  Once the bear was (DOWN) on the ground, he had to climb (OVER) a big boulder, but was headed straight for David.  But David was not afraid!  Do you know why?  Because David looked (UP) to Heaven and prayed to God to rescue him from the bear.  David quickly took out his slingshot and lifted it (UP) towards the bear.  He crouched (DOWN) low on his knees and aimed his slingshot just (OVER) the bear’s nose.  Success!  The bear went running away (OVER) the fields and (UNDER) some bushes.  That bear would not bother David again!  God had watched (OVER) David and He will always watch (OVER) you too!

Just in case you’re interested, you might want to check out this book with even more Bible lessons for your kids: Super Simple Bible Lessons (Ages 3-5): 60 Ready-To-Use Bible Activities for Ages 3-5

“Do not merely listen to the Word and so deceive yourselves, but do what it says.” 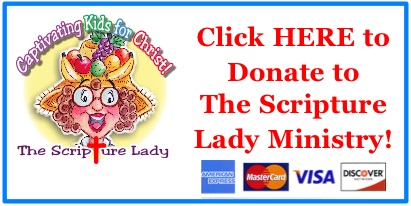 Would you like The Scripture Lady to come to your home town? 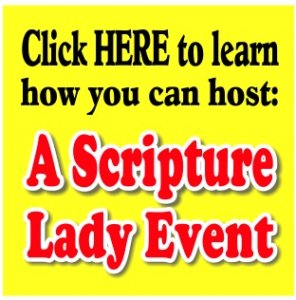